Jupiter Takes One For The Team, The Connecticut Star Party Arrives, The Pluto Killer Speaks and Telescope Classes are Back!

We’re packing up the 25 Obsession for the very last Star Party of the season. We head to the Connecticut Star Party this weekend, September 14-16 up in Ashford CT and hope you can join us. It’s put together by our good friends from the Astronomical Society of New Haven and always an excellent event. Today, September 12 is the last day to register online so get busy! 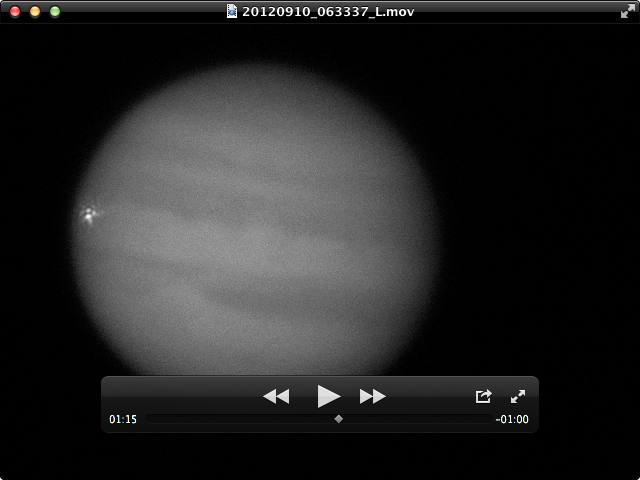 As you may have heard, Jupiter took a confirmed punch in the face the morning of September 10th. Proving yet again that amateur astronomy contributes significantly to science all the time, George Hall from Dallas TX happened to be recording the Big Ball of Gas with his video camera and caught a giant blast at 6:35 am central time. As of now, no one has confirmed a scar or any markings on the planet so most likely it was a bolide no larger than a mile or so wide. To see the actual video of the astronomical smack down, click George’s name above to go to his web site. Just be glad that little guy got sucked into Jupiter and didn’t make it a little farther into the solar system!

The Solar Dynamic Observatory caught our star with some serious but incredible indigestion. Click on the image to see this in it’s full AWESOMENESS. The Bad Astronomer Phil Plait explained it like this: On August 31, the Sun threw a major tantrum. It started with a vast arc of material towering over its surface, a stream of plasma flowing between two sunspots. Sometimes these collapse back down to the Sun’s surface, but this one exploded, blasting hundreds of millions of tons of material out into space.

August was supposed to be busy for us with 2 MeetUp Groups but the weather (as expected) did it’s usual New England thing and either rained buckets or just clouded us out. We did however have a great group of Scouts up to view the Blue Moon of August and it was a beautiful evening. Now on sale for $15 to members!
Astronomy 2013 Calendars
by Terrence Dickinson

We’ve got a bunch of new calendars in stock and are available for purchase NOW! We have a VERY LIMITED selection of these excellent 2013 calendars, edited by Terence Dickinson. Available now to our members for $15 and non-members only $20. Click HERE to see the rest of the calendar images.

Get them while you can!

The Westport Astronomical Society will be celebrating Hispanic Heritage Day with the Discovery Museum the weekend of October 6th! It’s a FREE event from 10-5pm in honor of latino scientists. There will be a radio station broadcasting live and we’ll be there with our incredible solar telescopes during the day. C’mon out and meet this great community!

Did you notice the image at the top of the newsletter? See how it says Rolnick Observatory? That’s printed with quite possibly the largest font ever invented as it’s entirely composed of galaxies! Using the millions of classified galaxies available Hubble and the Sloan Digital Sky Survey, a quarter million people have manually sorted through piles of weird, wacky and wonderful images of the cosmos using Galaxy Zoo. An intrepid member has offered this to the universe! And now you too can see your name in lights… Try it HERE.

Animation showing the movement of Eris on the images used to discover it. Eris is indicated by the arrow. The three frames were taken over a period of three hours.

Our September speaker David L. Rabinowitz is a research scientist from Yale that builds giant CCD cameras that search the sky for some of the most interesting of all objects: Exploding Stars, Black Holes and Planetesimals. An expert on trans-Neptunian objects, Rabinowitz assisted in the discovery of the most distant solar system objects such as Eris; an object more massive than Pluto that helped kill Pluto off to “less than planet” status.

We anticipate being very busy for this talk, come early! 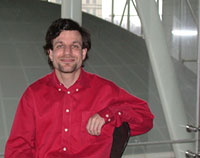 Astro Web Site Of The Month
by Cal Powell

The fifth largest telescope in the continental United States is now operational. The 4.3-meter Discovery Channel Telescope (DCT) is located about 40 miles southeast of Flagstaff, Arizona, where it will be the Lowell Observatory’s flagship research telescope as well as a terrific instrument for astronomy outreach. The DCT website at http://lowell.edu/dct.php has details on the instruments attached to the DCT and the major science initiatives that will be undertaken by it. In mid-September the Discovery and Science Channels will air “Scanning the Skies,” a program on the construction and first light activities of the DCT.

Please send e-mail on your own personal web pages, or astronomy links that you find interesting or noteworthy to me at planetarium.guy@gmail.com

Upcoming Events at the Rolnick Observatory

“I love to revel in philosophical matters–especially astronomy. I study astronomy more than any other foolishness there is. I am a perfect slave to it. I am at it all the time. I have got more smoked glass than clothes. I am as familiar with the stars as the comets are. I know all the facts and figures and I have all the knowledge there is concerning them. I yelp astronomy like a sun-dog, and paw the constellations like Ursa Major.”
– Letter from Mark Twain, San Francisco Alta Calfornia, Aug. 1, 1869

The Connecticut Star Party is September 14 to 16 in Ashford, CT.  We plan to attend with the 25 inch telescope.  Get more information at:   www.asnh.org

On Aug. 31, a group of Cub Scouts visited the observatory.  Bob Meadows and Dan Wright operated the telescopes.

Mike, who is working on the pier for the 16 inch Meade, has found a machine shop to make the cuts of the 10 inch steel tube.  The tube is there now.  One of the cuts is a precision miter cut for the polar alignment.

Telescope classes on how to operate the 12 inch telescope will be on Thursday Sept. 20, Monday Sept. 24, Monday Oct. 1, and Thursday Oct. 4.  The classes are weather permitting.  If you complete 2 classes and show you can use the telescope, and have been a member for over a year, you can receive a key to the observatory.  The course includes opening and closing procedures, the observatory grounds checklist, and using the program “The Sky” to operate the telescope.  Keyholders are expected to serve on public nights.  Contact Bob Meadows, or see him at the September meeting if you would like to attend the class.

Bookmark http://www.was-ct.org/ for semi-regular updates and now you can follow the Rolnick Observatory on Facebook and Twitter for regular updates on our speakers and current sky events!

We are an all volunteer society that is financially responsible for everything at the Rolnick Observatory, and we are always short on money. Please donate and renew your membership today!

Check out the WAS Wear Store! Incredible custom gear made for the Star Parties! Show your WAS pride!

The Latest from the Observatory

Mysteriously elected president of this fine group. Favorite quote: I would never belong to a group that would accept someone like me as a member. ~ Groucho Marx